Types of Refrigerants and Their Environmental Impact

Refrigerant is the cooling agent that’s contained in the coils of your AC unit. It absorbs heat and leaves cooler air as it passes through compressors and evaporators. There are different types of refrigerants used in air conditioners, and it’s easy to mistake one for the other. However, refrigerants aren’t interchangeable, and using the wrong type may cause damage to your unit. So it’s important to know the types of refrigerants and their environmental impact, and see if it’s time to upgrade your unit.

Types of Refrigerants and Their Environmental Impact

R22, commonly known as Freon, is a non-combustible gas undergoing an evaporation process repeatedly. It was widely used in refrigerators and AC systems for decades.

Freon used to be a relatively safer option compared to the toxic gases that were used as refrigerants before: ammonia, methyl chloride, and sulfur dioxide.

Later, evidence was found that Freon, along with other greenhouse gases, contributes to global warming and damages the Earth’s ozone layer. It was phased out in 2020 with the Clean Air Act of 2010.

If your unit is more than 10 years old, there’s a good chance it’s using R22. At this point, you might want to seriously consider upgrading your system, instead of waiting for it to break down. An outdated, less efficient, and environmentally harmful refrigerant is nearly impossible to replace in case a leak occurs.

Chlorofluorocarbons (CFC’s) are refrigerants containing chlorine, commonly used in equipment manufactured before 1995. Some of the common CFC refrigerants are R-11, R-12, R-13, R-14, and R-15.

CFCs are nonflammable and non-toxic but they’re also proven to be harmful to the environment. When they release chlorine atoms and react with ozone molecules, CFCs can deplete the ozone layer and cause UV radiation levels at the Earth’s surface to rise.

As a refrigerant, R410A or Puron gets the job done without harming the environment as much as CFC’s or Freon did. Puron doesn’t have chlorine that depletes the ozone. Puron also uses less energy, so you’d see a reduction in your energy bills, without compromising on air quality and comfort.

How to Tell Which Refrigerant Your AC Is Using

Aside from the owner’s manual, the exterior unit of your AC should indicate the refrigerant that’s required. R-22 is often labeled as HCFC-22, so look out for this if you have an older unit.

Once you know which refrigerant your AC is using, you’re in a better position to decide if an upgrade will serve you – and the environment- better. One refrigerant can’t be used in units that used to run on another, so you might need to get a new AC.

We’re more than happy to discuss with you the benefits of upgrading to a more modern unit, including the potential savings you get to keep in the long run.

Want to get started? CONTACT US to book an appointment with a Good Guy. Our experienced and knowledgeable air conditioning specialist can answer any questions you may have about installing a new, eco-friendly, and cost-effective AC unit. If you need your air conditioner replaced or repaired, a FREE VIRTUAL QUOTE is available 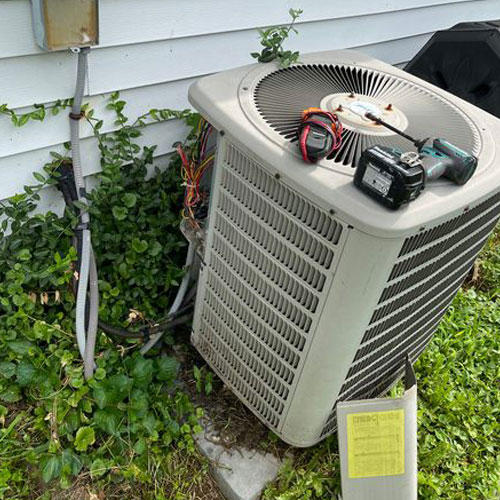 In just a few clicks, our app connects you to a local technician, and It makes it faster and easier to
book installations, same-day service repairs, maintenance appointments, view work history, and more.

EACH LOCATION IS OWNED AND OPERATED LOCALLY WE DO NOT OUTSOURCE WORK TO INDIVIDUAL SUBCONTRACTORS.

These locations serves all the surrounding areas

Good Guys Heating and Air Conditioning, Lafayette
Crawfordsville, IN 47933, USA, Thorntown, IN 46071, USA, and 7 other areas